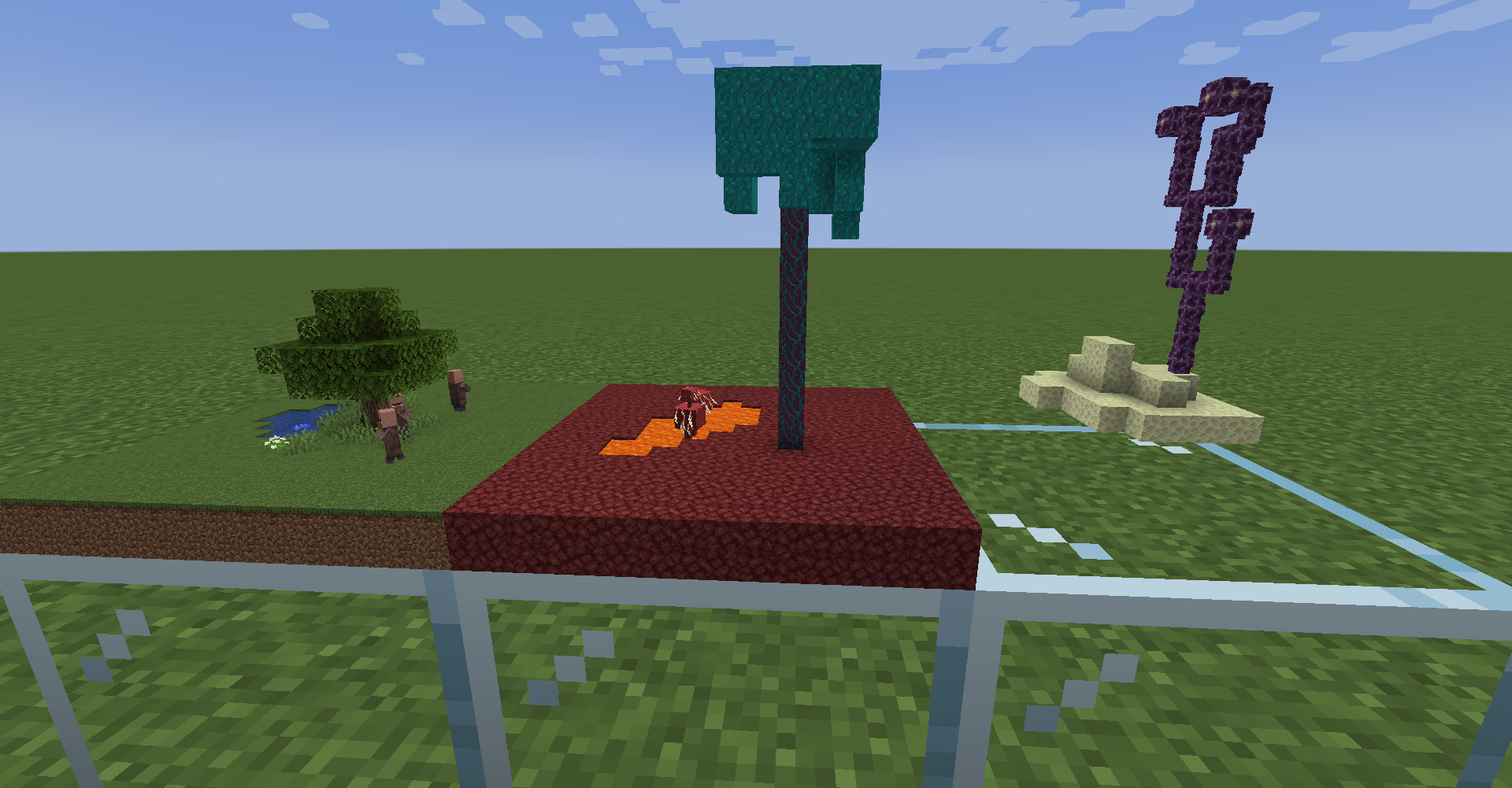 (This describes the latest version of MiniScaled) 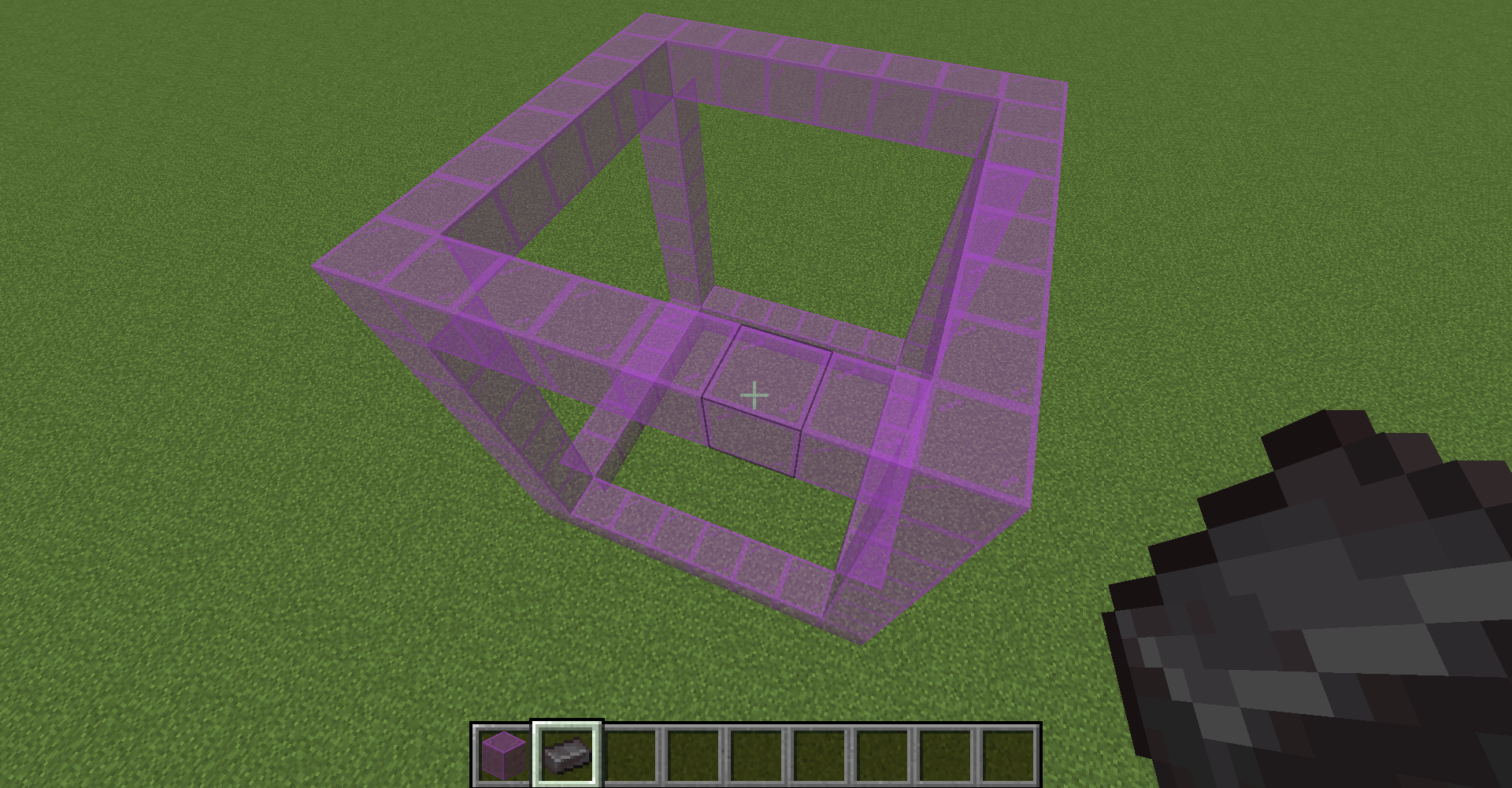 In creative mode, you can get scale box entrances and the scale box manipulation wand in the "Tools & Utilities" tab: 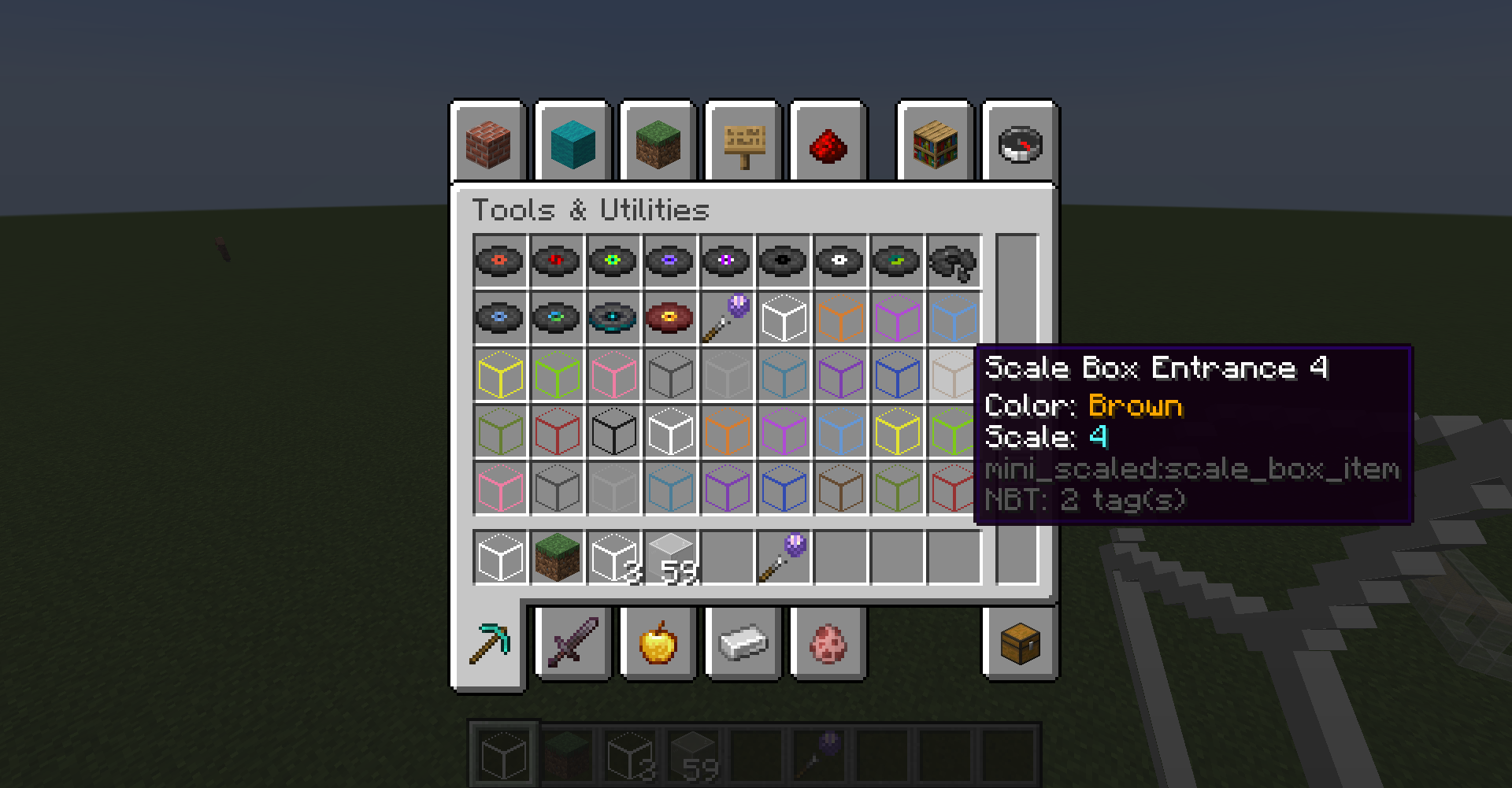 # How the Entrance Works

The actual scale box is in another dimension (mini_scaled:void). The scale boxes are discriminated by its color, size and owner. (You can enter a scale box owned by other players.)

The scale box entrance item is just an entrance and does not hold the actual scale box. If you lose your entrance item, you can create another entrance with the same size and color.

One scale box can have only one entrance placed (because the portal is bi-way). If two entrances of one scale box are placed, the old entrance will break.

If you want to break the entrance, you have to be a little bit further to interact with the placeholder block.

When creating an entrance, you will be also given a scale box manipulation wand. By using the wand to right-click on air, its mode will be switched. It has 5 modes:

# Expanding and Shrinking the Scale Box

The scale box can be expanded and shrunk. 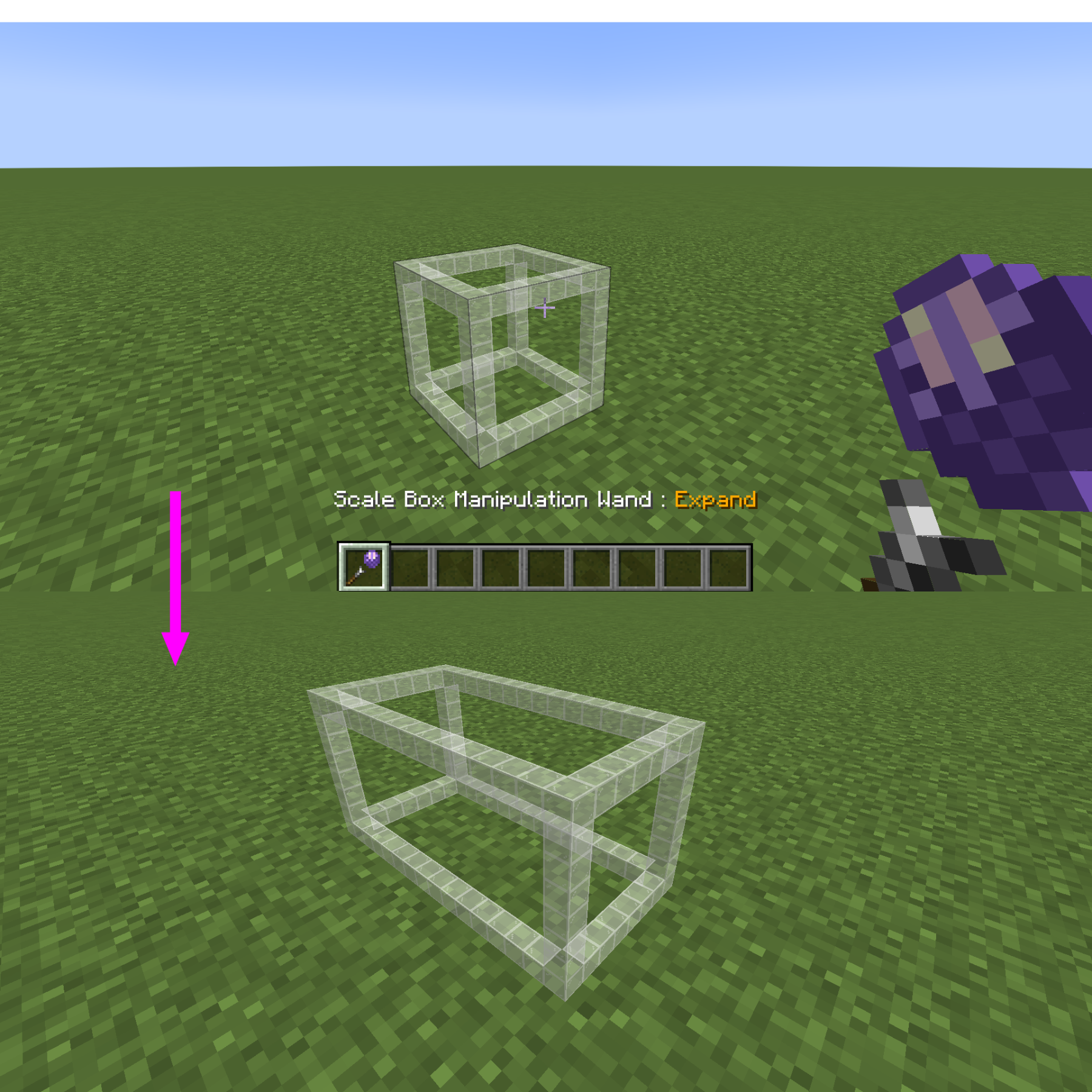 In survival mode, expanding it cosumes entrance items. However, an expanded scale box still correspond to one entrance item.

In survival mode, by shrinking the scale box, an amount of netherite ingots will be returned.

It can only expand and shrink from some directions. These directions are the directions that correspond to the inner up, south and east. Why is there such a limitation? Because if you expand it from south and then shrink it from north, the inner region should move in space. It could move out of height limit or move to the region of other scale boxes, so it's not allowed.

# Placing the Scale Box with Rotation

You can place a scale box with rotations: 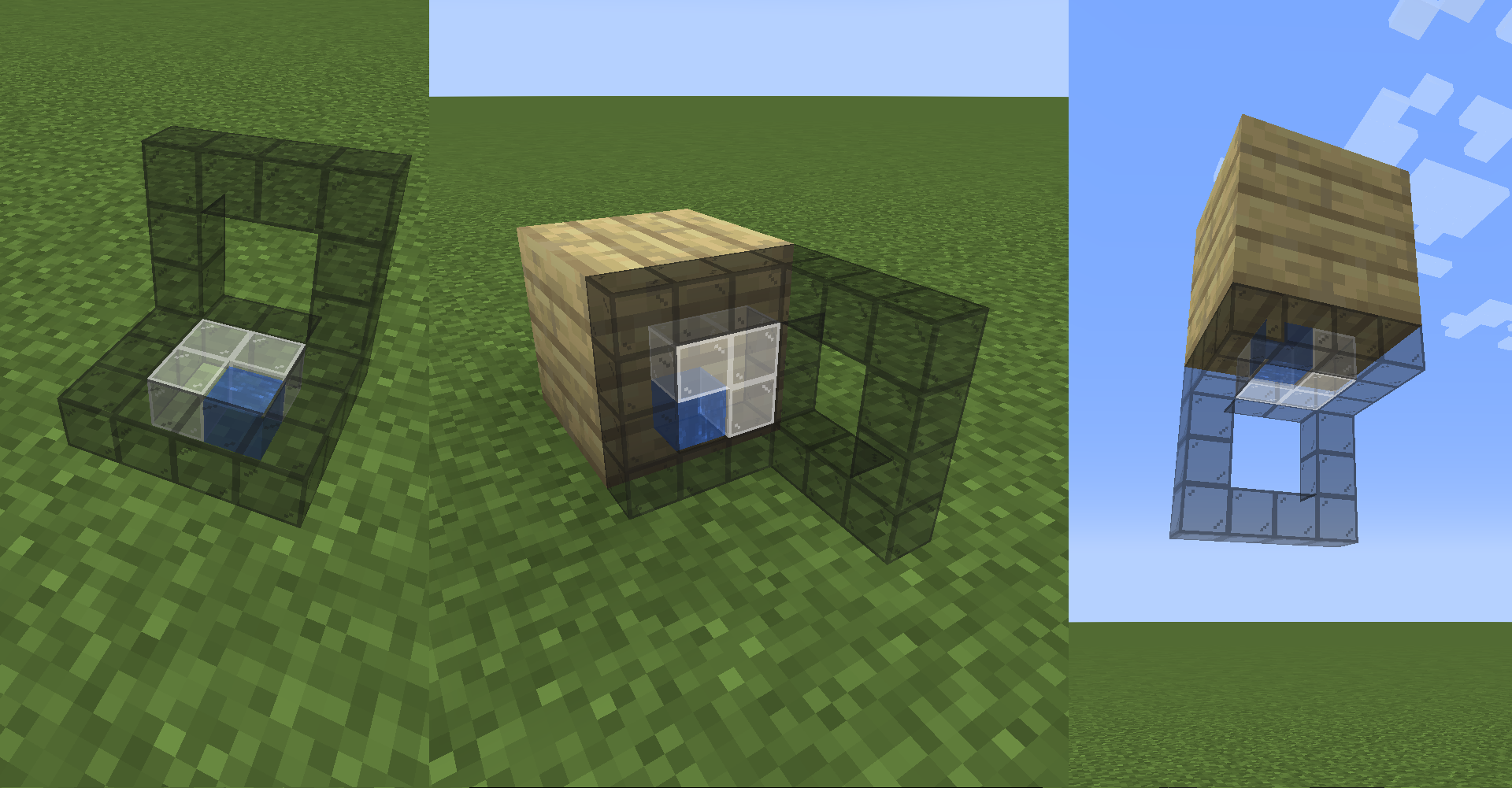 When placing the scale box, the face that you are placing on and your position will determine its rotation.

You can use the manipulation wand to change whether the scale box transforms scale and gravity during teleportation. The scale change requires Pehkui mod. The gravity change requires Gravity API mod. See Spacial Transformation.

You can put a scale box inside itself and create a fractal.

When you are standing on the top of a scale box, crouch(press shift) to descend.

You can access the config by mod menu or directly edit config/mini_scaled.json. You can specify another item (other than netherite) as the scale box creation item.